IntoRobotics has been known as a magazine for robotics tools, components, and information. Today it is so much more than that. It becomes a place to share what I learn and build in my two-rooms apartment in the city center of Bucharest. It is a small place to build robots, but it is full of ideas, joy, and opinions.

My name is Calin Dragos and I’m a computer and automation engineer. I learn and experiment with software (ROS, OpenCV, TensorFlow, Gazebo) and build autonomous robots. I’m interested especially in computer vision and robot navigation.

If you have a project, idea, proposal that might make my work more interesting, e-mail me at office@intorobotics.com. For the reasons stated above, I’ll only respond to those e-mails that are a good match for my schedule and interest.

This blog cited as references in these books: 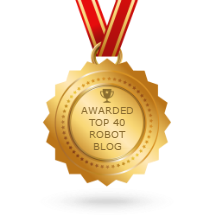 About the Affiliate Program

Commerce Content is independent of articles and advertising, and if you buy something through this blog, I may get a small share of the sale.

Support this blog by purchasing from Amazon through this link

Never miss a post! Subscribe to the IntoRobotics RSS Feed and keep up to date with my projects, tutorials, reviews, tips, and tricks.

This website or its third-party tools use cookies, which are necessary to its functioning and required to achieve the purposes illustrated in the cookie policy. If you want to know more or withdraw your consent to all or some of the cookies, please refer to the cookie policy. By closing this banner, scrolling this page, clicking a link or continuing to browse otherwise, you agree to the use of cookies. More info